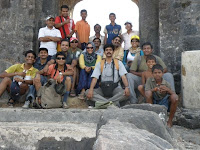 25th April’09: This was a private trek organized by Vinay and entry was by invitation only. The main aim was to see Padmadurg, a sea fort bang opposite Janjira near Alibaug 4 K.M. inside sea. Actually no one is allowed on this fort only local fishermen go there. Me and Jayram decided to go for this as it will be difficult to get a chance again visiting this fort. I started from my house at 10.15 P.M. and went to Uday’s place at Lodha heaven in Dombivli. We had hired his Trax cruiser for journey and from there we took Trax and dropped his relatives in Mulund and reached near Chakram’s office by 11.30 P.M. One of the members, Hemlata was late and we began our journey towards Murud by 12.30 A.M. We picked up Nitin at SK wheels, Turbhe on the way. Me and Rajan were seated in front. Jayaram was supposed to join us at Murud.

26th April’09: We reached Wadkhal naka by 2.30 P.M. and had tea. After this the cold wind started taking toll on me and started getting drowsy. But Rajan woke me up and then I felt fresh. Then Rajan dozed off and we inched our way towards Murud. We passed through Phansad sanctuary and forest was really looking dense. At Murud, We caught up with Jayaram and moved towards village. We reached by 4.15 A.M. There was a big temple of Lord Ganesha and poojari was already preparing for Pooja. So we decided against sleeping in temple premises as sound of bell will disturb us. We slept near a hanuman temple and dosed off for an hour and half. Then someone woke me up at 6.00 A.M. and I started preparing for day ahead. First time I had a slept under open skies with sound of waves nearby. It was great feeling. After this was best part, searching for place to pass stools. Luckily Sachin had got tissues, So we made upto rocks on the beach. We were told by villagers not to go farther as then begun area for females. Best part is once high tide comes everything will be washed away and rocks will be clean once again to take shit of next day ☺. After all daily chores, we did a small climb to reach place of the Village head of fishermen and settled outside his house for breakfast. The village head was generous and arranged for tea too. We were going to sail in his boat. 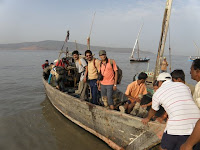 started our journey towards Padmadurg. Initially everyone had fear of falling as boat cruised through waves but slowly everyone settled down and sea was clam. We went parallel to Janjira and water here was dirty brown in color. Once we crossed Janjira water turned soothing green like Mediterranean. Far off 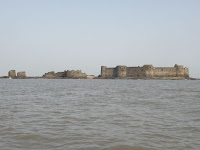 we could see Padmadurg standing in middle of sea. We had Apte Kaka with us and so we had a dive into history of the fort. The history is that the Siddhi's had controlled the land from the Kundalika river to the Savitri river near Harihareshwar during their rule and were never defeated. Siddhi's were basically Abyssinians (current Eithopia) and had come here by sea. They built Janjira on the island and made it very strong and controlled the sea and land from here. There are underwater tunnels from Janjira which open on Land in the vicinity. In one of them Villagers still enter and kill bats there. This information was provided by boatman’s sons.

Shivaji Maharaj waged a losing battle against the Siddhi's but he could not capture Janjira anytime. Shivaji Maharaj built Padmadurg to keep a check on Siddhi as he could not let Siddhi rule with oppression. Padmadurg was built around 1675 by Daulatkhan (an architect) and was in the control of Marathas until 1698 when Siddhi captured it and ruled it until the end.
The fort is divided into 3 parts. The main fort, the padkot (or the supporting fort) and the retaining wall of the fort. We reached Padmadurg and got off, the boat was rocking strongly as high tide was setting in and we got down with great difficulty on slippery stones. We got down

and reached first door of Fort called as Darya Darwaza. We did not enter from Darya Darwaza but went around the fort and entered the pad

kot part. Padmadurg was named as Padmadurg because of the shape like lotus petals as seen in picture here. Here Apte Kaka read out a letter written by Shivaji Maharaj to one Jivaji Vinayak, Who was possible to provide necesseities to buit the Fort. The fort is built with some special cementing material which has not got eroded even though the stone has got eroded. 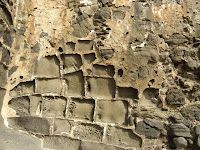 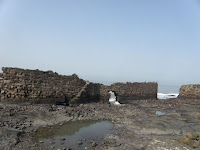 We then saw the third part the wall and one of the wall centres had collapsed creating a hole. The scene was just too beautiful. Then we entered main fort through main door. Here are few barracks made by indian customs. There are 3 huge tanks but were dry and some store rooms. The fort is scattered with cannons everywhere. I had read that fort had 46 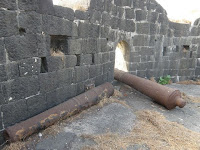 cannons and some had fallen from their places down on rock below or may be pushed down by someone. I could locate 37 of these. Apte kaka also told story of Kanoji Angre and then we decided to depart after a group photo. Also there are stories that RDX for Bombay Blasts was landed on this fort. After this we started our return journey and went from other side of Janjira to the jetty. Then we started our journey towards Ekdara for Samrajgad. 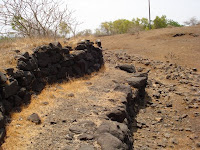 This fort is hardly known by anyone and was built by Samrajpant under Shivaji Maharaj vigilance. The fort eas built to keep watch on Siddi’s activities. But it was won by shrewd siddhi in 1675. There is ‘L’ shaped bastion left which defines the existence of fort. Once you cross this bastion and move towards opposite end on left you see is Janjira. The view of Janjira Is too beautiful from here. On the right you see Padmadurg. Apte Kaka here told us the story of how Samrajgad was conquered by shrewd siddi. Then we quickly got down and went towards Patil Khanaval for lunch. We had good lunch and then we started our return journey, Onwards we decided to look at Revdanda fort. I knew Revdanda is famous for Birla Mandir but never knew it also had a sea fort. 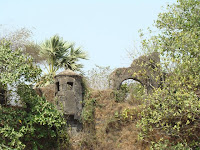 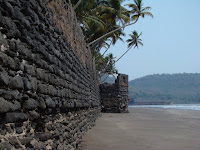 The sea fort of Revdanda is quite big and has a vast expanse. 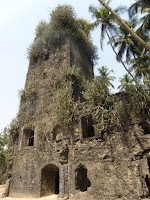 There are few houses inside the fort. Also an old siddheswar temple. The fort is built by Potugese and houses famous Square bastion ‘chaukuni buruj’. Oppsite the fort once you come out on beach you can see Korlai on hill. The Revdanda fort also has few canons and even has a church. The walls are 2.5 ft to 5ft thick. We took rest for a while here and staretd our return journey to Mumbai.
Posted by My Adventures!!! at 11:52 PM

My Adventures!!!
This is Purvesh here also known as Jim. I am a Adventure enthusiast and like to play my fav game called - LIFE!!!